A while back I built a four-stroke engine kit for fun.  I had a few thoughts ...
So, I started thinking about how I'd like to see a four stroke engine designed (in theory).  A couple design goals were:
So, to start, I wanted to use both ends of a piston for combustion.   This immediately cuts the components in half.  Also, this way the engine could reuse momentum for compression in the next cycle.

Though it can do better.  The whole mechanism can be reduced to use only one irregularly shaped piston.

While I sketched the piston as having flat sides, the original thought was more of a torus shape.  I thought a flat design would be simpler to machine though. 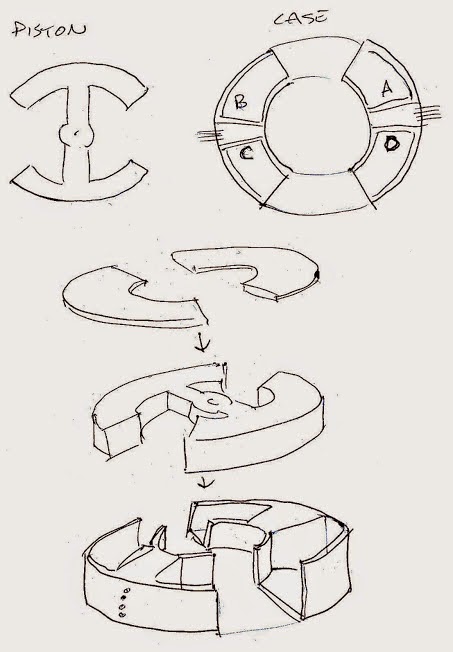 Compression occurs between the end of the piston and the points A B C D.

Ignition occurs in the cycle:

Vent and fuel lines are between B and C.  Also, between A and D.   If cams are used, they can be driven directly from the rotations off the piston axle (no need for timing belt).

Example of operation, focusing on A:
The other cases follow the same pattern (just re-label A B C D).

Since all the motion is circular, this simplifies the cams needed to control the vent valves.  Everything is moving around the same point of symmetry.

Power is tapped from the piston's axle as it rotates.

Possible issues I see would be:

Let me know if you see any issues with the concept/design.  I don't plan on building it... but the fun part for me is in the design part.

I call this thing a "Batwing Engine," named after that weirdly shaped piston.  :-)

Here's another attempt at creating a simple Origami toy puppet (well, it's not pure Origami if you cut the hair).

The design is based off a shallow box like:

You'll need a long piece of paper (around 3x1).  Start by folding a long shallow box, but allow a bit extra paper on one end for hair. 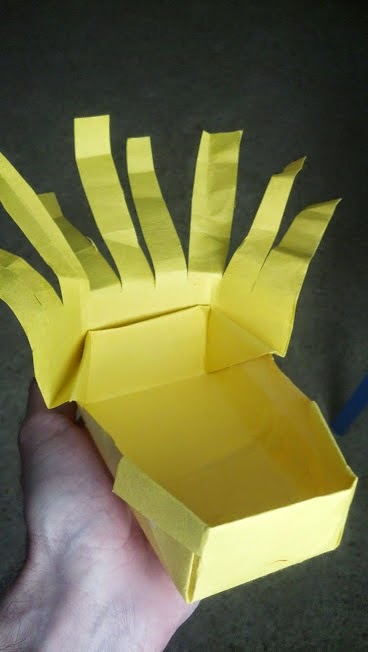 Then just fold the box over on itself. 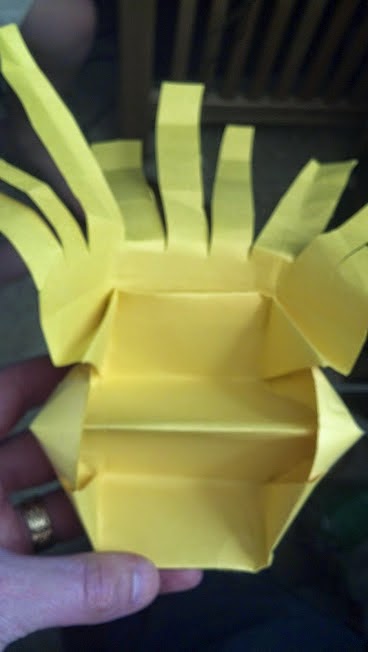 Posted by Unknown at 7:27 AM No comments:

Each bar of Lindt & Sprüngli chocolate is personally sniffed by the master chef  :-) 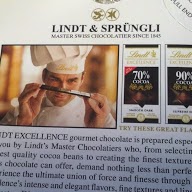 Posted by Unknown at 8:15 PM No comments:

Here's batman mask that cracks me up: 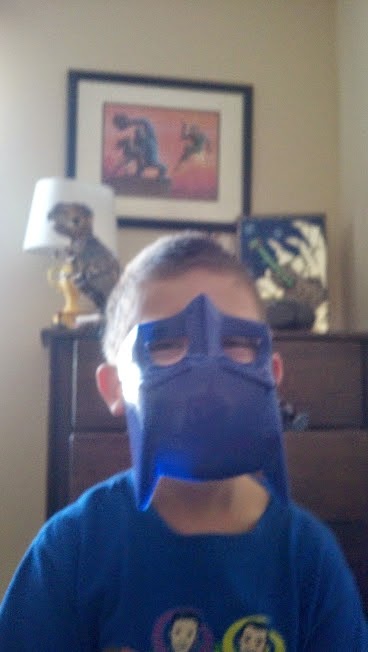 especially with the warning label on the inside: 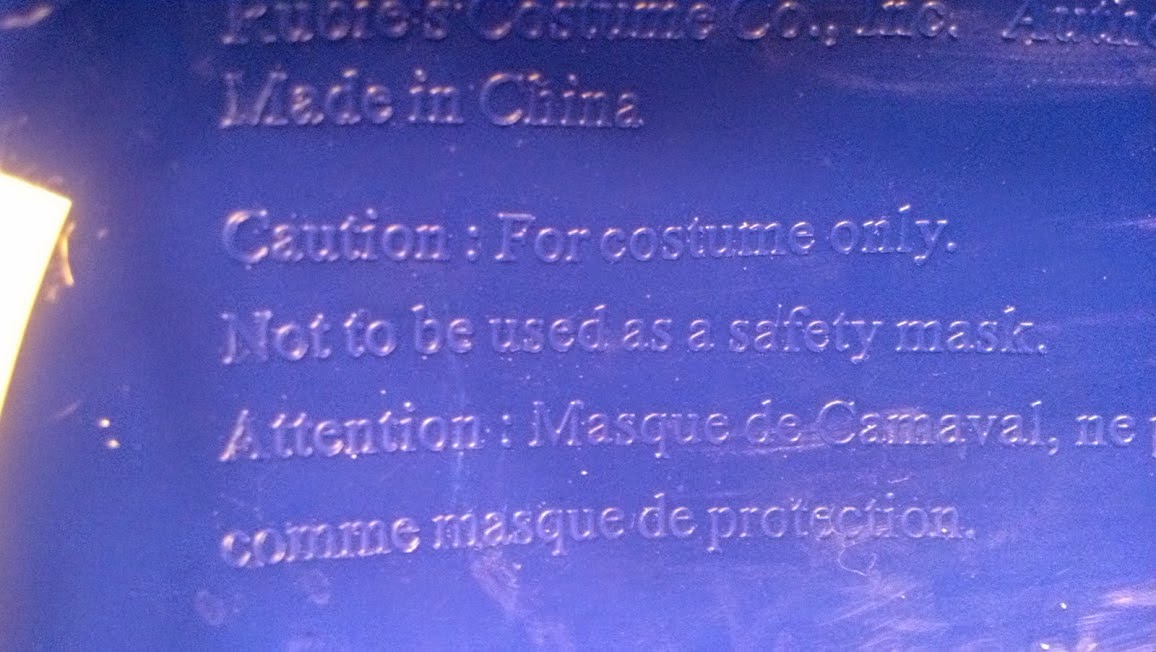 "Caution: For costume only.  Not to be used as a safety mask."

Posted by Unknown at 8:15 PM No comments:

I like analyzing abstract philosophical/logical arguments.  I do see a few potential issues with Gödel's Ontological proof. Here is a short analysis of the proof :)

1. For the backbone of Gödel's Ontological argument, it looks like Gödel constructs a set of 'positive' attributes, and then includes the concept of  existence in the set (with the assumption that necessary existence is a positive attribute).  For example, he constructs a set like:

In this case, p1, p2, p3 are 'positive' essential attributes, and E is the idea of existence.

If I try to imagine the specifics of what the set contains, a random set of ‘postive’ things might look something like this to me:

Here's the issue.  If a set contains 'the idea of existence' as a member, it doesn't imply the entire set of attributes exists, or even that each member of the set  exists or interacts with other members of the set.

Otherwise, consider applying a similar argument to a subset.

Define: Superman is a man, such that no greater man can be conceived. He’s basically a watered-down version of all essential attributes in set G1, except as applied to a flesh-and-blood two-legged man with a weakness to Kryptonite.

Such a set of essential attributes may include:

However we can add the idea of 'exists' to the set, where

Then, S2 is greater and more powerful than S1.  So, by similar reasoning, Superman exists.

Because, between the two, “real Superman” would win any fight, because “fake Superman” can never show up. Superman's existence is an essential attribute to the concept of superman. If he didn't exist in the comic books, he would not be Superman. :)

2. A potential issue is the subjective notion of 'positive'.  Gödel seems to view this as a binary property (something is either positive or not positive).  But in reality, this is usually quite a bit messier.  Positive and negative attributes  are often two sides of the same coin, and they cannot always be separated.

For example is 'knowledge' intrinsically good?  What is better, an evil genius, or someone who wants to cause harm but lacks knowledge to do so? (imma looking at the "underwear bomber")

Similarly, 'existence' in itself is neither good or bad intrinsically (consider the idea of ebola in one's mind, vs real ebola virus in one's mind). :)

In general, I think when assigning 'positive' or 'negative' values, usually some thing or action must be combined with intent, and then potential   effects are weighed as 'desirable' or 'not desirable' by those affected.  For example, people might even view ebola as a ‘good’ thing if it produced effects that people liked and could control (like curing cancer).

3. A more general issue with an Ontological-style proof is 'greater' is a comparison operator applied to an ordered set.  But for example, consider defining N to be the largest number, such that no larger number can be conceived.  For an infinite (unbounded) set,  this definition itself may not be consistent.  We can always add 'one' to make the number larger.  Similarly, we can always form composite sets to create a larger set, or add new attributes.  Or simply double the measure of all attributes. While Gödel's version avoids the direct issue, it is still present.  It’s not enough to say an attribute is included in a set, the attribute will have a measure.  For example, regarding an attribute like 'knowledge', how many primes can be known, if there cannot be a largest prime?

5. However, what is very interesting about Gödel's argument is it brings out a point about broader limitations of math and logic.  Math is the study of patterns. Logic is the method by which information can be rearranged, cross-checked, and discarded.  Math/logic in itself cannot produce apriori truths about reality.  Conclusions in pure logic can only rearrange the information already contained in the premises.
Posted by Unknown at 9:01 PM No comments: