My wife's mother was having trouble with Windows Vista (64 bit). She said that  Windows installed a couple system updates, then stopped working. Sure enough, I restored the computer to a previous configuration, got everything working. Then Microsoft installed ten updates again, which completely broke the system. It wouldn't even boot. This took several hours to fix.

I think it's questionable on Microsoft's part, why this broke. Especially since it occurred during the start of the biggest spending week of the year, right before Black Friday.

Coincidentally, Microsoft just introduced a new product they are wanting to sell: Windows 7. It certainly would be a clever way to drive up sales of new PC's during the spending spree. If they break Vista and XP, a lot of people would just buy a new computer rather than paying the cost of fixing an old one.

Or maybe they just don't know what they are doing.   Neither explanation is good.  :-)

At the very least, there's an inherent conflict of interest in that Microsoft is able to modify software that someone purchased, at the same time they want people to stop using it and buy something else. Since like any company, they assign priorities in terms of what makes the most money.  :-)
Posted by Unknown at 2:21 PM 2 comments: 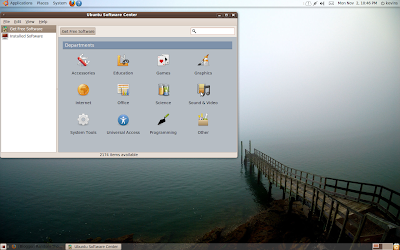 Ubuntu Linux 9.10 was released over the weekend and I upgraded my computer. The newest version is fantastic. It has thousands of free apps that can be installed with one click, and 2 GB of free storage in the "Ubuntu One" cloud.

http://www.ubuntu.com/products/whatisubuntu/910features
Posted by Unknown at 6:33 AM No comments: